Spirit Fest at Camp Chesterfield and Spirit Validations In My Path 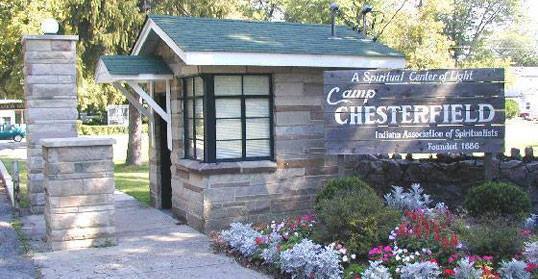 This weekend was the Spirit Fest 2019, at Camp Chesterfield in Chesterfield, Indiana. This is a beautiful and amazing place all on its own and you add the power of all these high vibration people's that people are setting forth intentions to heal and change the world,  well now the place is really vibrating at 11! It is such an amazing and beautiful place. I really need to be there when I am not attending an event.  I decided to offer my chair massages and energy work.  With so many other energy workers and healers there already, I really was not sure if what I offered would even be able to standout among all the beauty there. I knew though Spirit would take care of me (she always does) and whomever was called to me and my tent to feel better in their bodies; which in turn would teach me more about me.                                                 I had so many beautiful and amazing beautiful souls come into my presence!! 🌟🌈👩👨 Many were led there from other beauti
1 comment
Read more

- May 11, 2019
We are always and often told - Life your life to the fullest because you never know when it is your time is up. We may know someone given a diagnosis and a prognosis of a certain timeframe to live before they are expected to pass. We get these "shoulder taps" reminding us over and over again tomorrow is not promised and you better do what you love today. You just never know how your day is going to actually end.  I was getting ready to go see the Avenger's with my family. My fiancé bought us tickets opening night for us to go. I had to move a client schedule around so we could go. We were set to go. I decided I wanted to put on makeup before we left. I was in the bathroom and our bathroom has a walk in stone and cement shower with a stone and cement seat made into the shower. I was full dressed and had not taken a shower but I was standing next to the shower when my feet got caught in a toilet paper roll holder. Both of my feet became trapped and I felt myself moving
Post a Comment
Read more

Riding The Red Devil - as an Oncology Massage Therapist.

- September 06, 2018
Two Of Us Are In a Room One of us is sick.  She has lost what would’ve identified her as a girl. The thing women look to have, develop, and maintain throughout our lives. Yes, the very same thing that causes teenage girls to cry over the pain of them growing. They are for much more than looks-they symbolize what we, as women associate with being feminine. In this room, the doctors have taken both of her breasts to try and save her life. They tell her the illness ravaging her body is hormone-based and she must have a full hysterectomy to live. We all know there is so much more to being a woman than breasts and a womb, but can you tell her that? Can you tell her that she is still a woman as she sits in this chair with poison being fed into her body to try and shake the disease? She has already cut  her hair. She said now she has to shave it off, because it hurts her. She is losing the feeling on the bottom of her hands and feet because of the side effects of the poison. It w
Post a Comment
Read more

- September 06, 2018
For many of us, the idea of blooming into a woman was an exciting prospect. I remember there being so much emphasis on those two organs that grew upon our chests. I remember the pain they caused me as they grew. I cried myself to sleep many nights in the 7th  grade because I went from an A- to a D-cup seemingly overnight. By the same token, I remember how, even at that age, I somehow felt more attractive because I had breasts than I would be without them. No, I did not base my worth on my breasts, but I did gain more confidence in those awkward years for having them. As I’ve grown older, I have had a more hate than love relationship with my own breasts. They were not great milk producers when I tried to breastfeed my son. They still make shirt-shopping such a hassle and the “boob gap” you get with button-down shirts is a thing! Not to mention the fact that I regularly find random debris in my bras. I must be struggling with where to put food because, no matter how h
Post a Comment
Read more

- June 14, 2018
We have all seen it. You go out to dinner or an outing with friends. There, you see people sitting together and no one is talking to one another. They all have those handy pocket-sized computers in their hands. The THING we on average touch about 2,617 times a day—our cellphones!  In a famed study, a researcher studied how many times friends touched each other while sitting at a café. He collected data around the world. In Mexico City, couples touched each other 185 times. In Paris, 115 times. In London, 0 times. In Gainesville, Fla., twice. We live in a world where you can have conversations with total strangers in some of the farthest reaches of the planet via internet, yet we are a million miles away from the people right in front of us. It really is amazing (not to mention completely inconsiderate and rude) that we have all become this way at the behest of technology. I love that I can Google ANYTHING and get a result to explain to me my question. Yet, I loathe having to talk to a
Post a Comment
Read more

How Massage Therapy became my employment and passion

- April 04, 2018
One day while at work it became so clear to me. All my life I have fought to be me. Fought to be who - I - wanted to be. Look and dress the way that I want to. Demand others to treat me the way I want to be treated and know that I am never going to be what any one else wants me to be. I have ended relationships with friends and lovers/ husbands/ boyfriends that did not serve me. That were toxic to me in some way or another. So how in my 41 years of life have I been so brazen with all these relationships but the one relationship that literally is the biggest part of my day, every day? How did I miss that the place that I have spent approximately 24,960 hours of my life at is the most toxic relationship I have ever had. My place of employment. Then it hit me. If my job was my boyfriend, I would have dumped him LONG ago. So when this sadness hit me, like a huge brick wall, I realized that I needed to find what it was that brought me joy. So I thought about it one day about the things
Post a Comment
Read more